The “perched” villages of Provence

Discover the heritage of Provence by strolling through these small villages, built from local stone and full of character, and soak up the Provençal culture, history and way of life...

As you round the final bend on a pretty road lined with dry stone walls, Gordes arises majestically ahead of you, one of the hilltop “perched” villages classed among the “Most Beautiful Villages in France”. An incredible setting with a superb view over the Luberon valley, charming cobbled lanes, opulent houses and a Renaissance château at the heart of the village...

Places to visit around:The Cellars of the Saint-Firmin Palace, the "Village des Bories” open-air museum, and the Sénanque Abbey 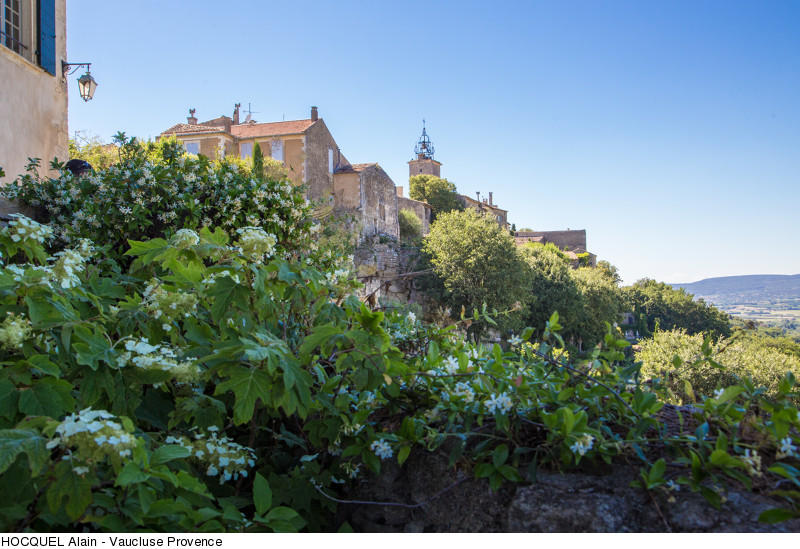 From atop its rocky plateau overlooking the “garrigue” (brush land) and vineyards of the Luberon, and made famous by Peter Mayle in his book "A Year in Provence", the Ménerbes citadel and its château stand watch over the plain... Food and wine connoisseurs can indulge their senses during a visit to the Maison de la Truffe et du Vin!

Lourmarin is a village of artists, and listed among the "Most Beautiful Villages in France". A typical picturesque village where life is good... We particularly like its 15th-century château.

Find out more here :  The Château of Lourmarin

Classed among the "Most beautiful villages in France", Roussillon is the second most visited village in the Luberon after Gordes. The village is built at the top of an ochre cliff face, and offers visitors a perfect blend of colours with its stones, roofs and façades mirroring the red tones of the neighbouring landscape...

Along the Wine Route, you will catch sight of the small village of Séguret, clinging to a hillside and overlooking a vine-filled plain, with its wall of houses built into the old ramparts.

Once inside the village, let your instinct guide you as you follow the narrow stone streets running adjacent to the main road, then begin your ascent to the chapel at the top to take in the view of the surrounding plain and the hills of the Dentelles de Montmirail.

Perched on a rocky outcrop overlooking the Valley of Hell, the village of Les Baux has provided a backdrop for many dramatic scenes over the centuries.

You are sure to enjoy meandering past the Renaissance-style houses in the heart of the village as well as the stunning view from the château at the top. In the surrounding area, enjoy a drive through the vineyards and olive groves, but don’t forget the limestone cliffs at the foot of the village, with the old stone quarry that once ensured its owners’ wealth.

Another highlight you won’t want to miss is the Carrières de Lumière light and sound show, depicting the works of the great painters. 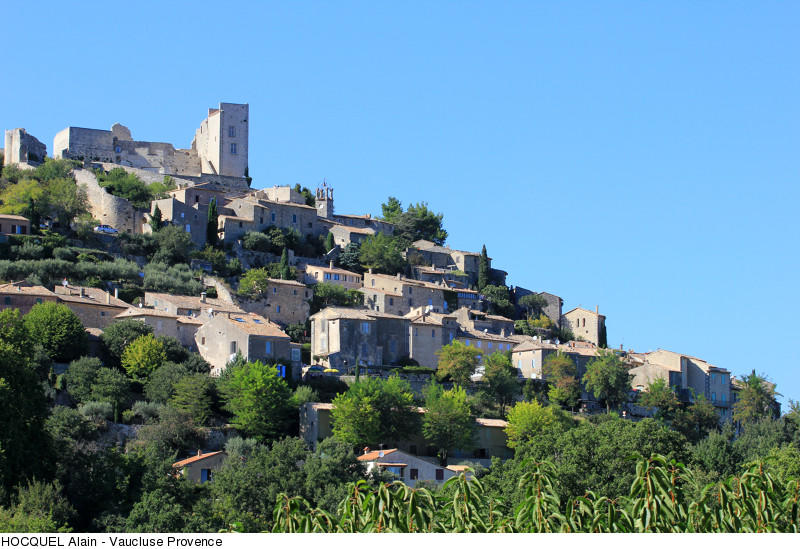 Lacoste is a small stone village perched on its own hillside where the Middle Ages and Renaissance collide in the traditional architectural features of its houses, and its arched passageways...

The village has been the epitome of glamour and luxury since the arrival of the famous fashion designer, Pierre Cardin, who renovated the château that once belonged to the Marquis de Sade, along with thirty or so other houses where he has stamped his mark.

Art in its all its forms is well- represented and, as you walk around, you will stumble across various art galleries, lending the village the feel of a museum. A lyrical art festival is held here every July. 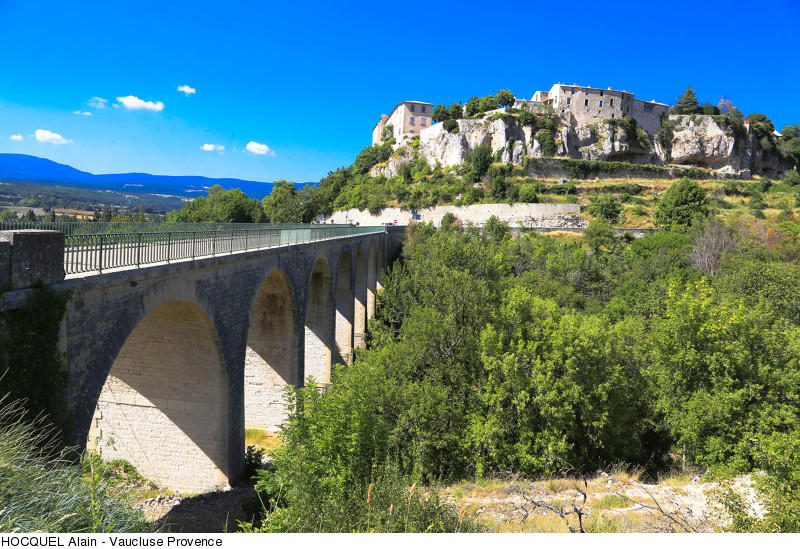 The lavender capital of the Vaucluse. The village is located in the heart of the Albion plateau, the area so favoured by Giono.

In season, all around Sault you can admire the most beautiful fields of lavender, by touring around Monieux, Aurel, Férrassières, Saint-Trinit, le Revest-du-Bion, etc. 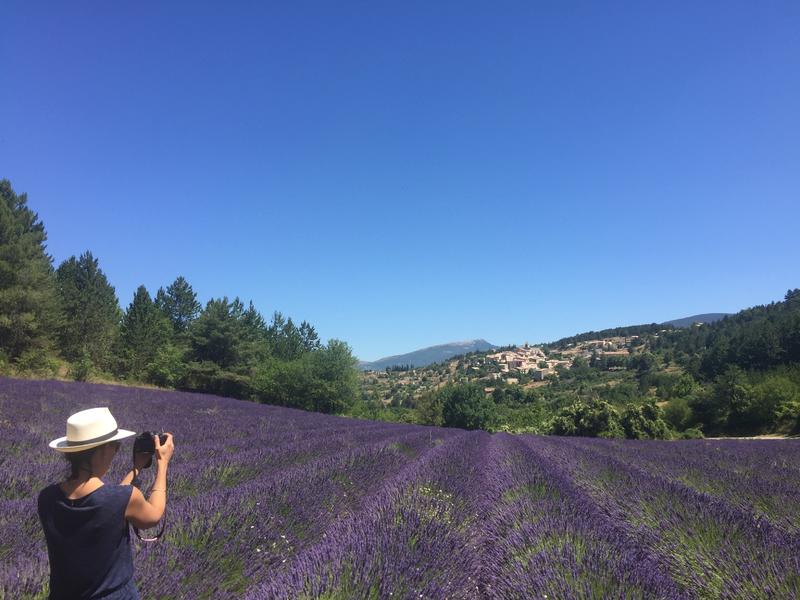 If you want to see this image in person, go there in July, leave Sault in the direction of Montbrun, leaving the road leading to the Ventoux summit on your left. After around 4km / 2.5 miles, you will see the lavender field that overlooks the very pretty village of Aurel.

At the top end of the field, lie down between two of the rows of lavender and you will have this view. Aurel is not really a hilltop village as such, but more a village hanging onto the edge of the Albion plateau. It is a beautiful typical Provençal village with the ruins of its château and is houses built up high. It is a place where they grow lavender, lavandin and spelt, the latter an ancient grain that is well suited to low-mountain range cultivation. 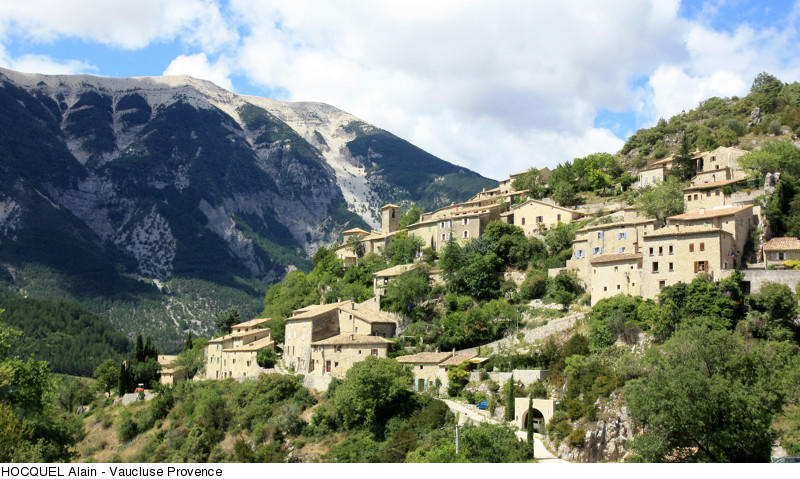 Probably one of the jewels of the villages you can visit at the foot of Ventoux, Brantes is located on the northern side of the "Giant of Provence"; a hilltop village that can be seen from its Roman bridge over the Toulouranc river, which is a remarkable monument in its own right.

What is impressive about Brantes is the fact that, just fifty years ago, its demise appeared inevitable; everything was falling into ruin when a group of enthusiasts reversed the trend by renovating buildings, moving artists and artisans into them, and nowadays the "tourism" game means a living can be made here.

Avignon is known as the "City of Popes", quite simply because several popes resided there between 1309 and 1411. The presence of the seat of Western Christianity led a large number of wealthy Italian merchants to the Comtat Venaissin. Many traces of this period remain, such as the Palais des Papes.

Standing at 1912 metres high, Mont Ventoux dominates the Provençal landscape, hence its nickname "The Giant of Provence". Here are just a few ideas of trips and activities around Mont Ventoux...