The Santons of Provence 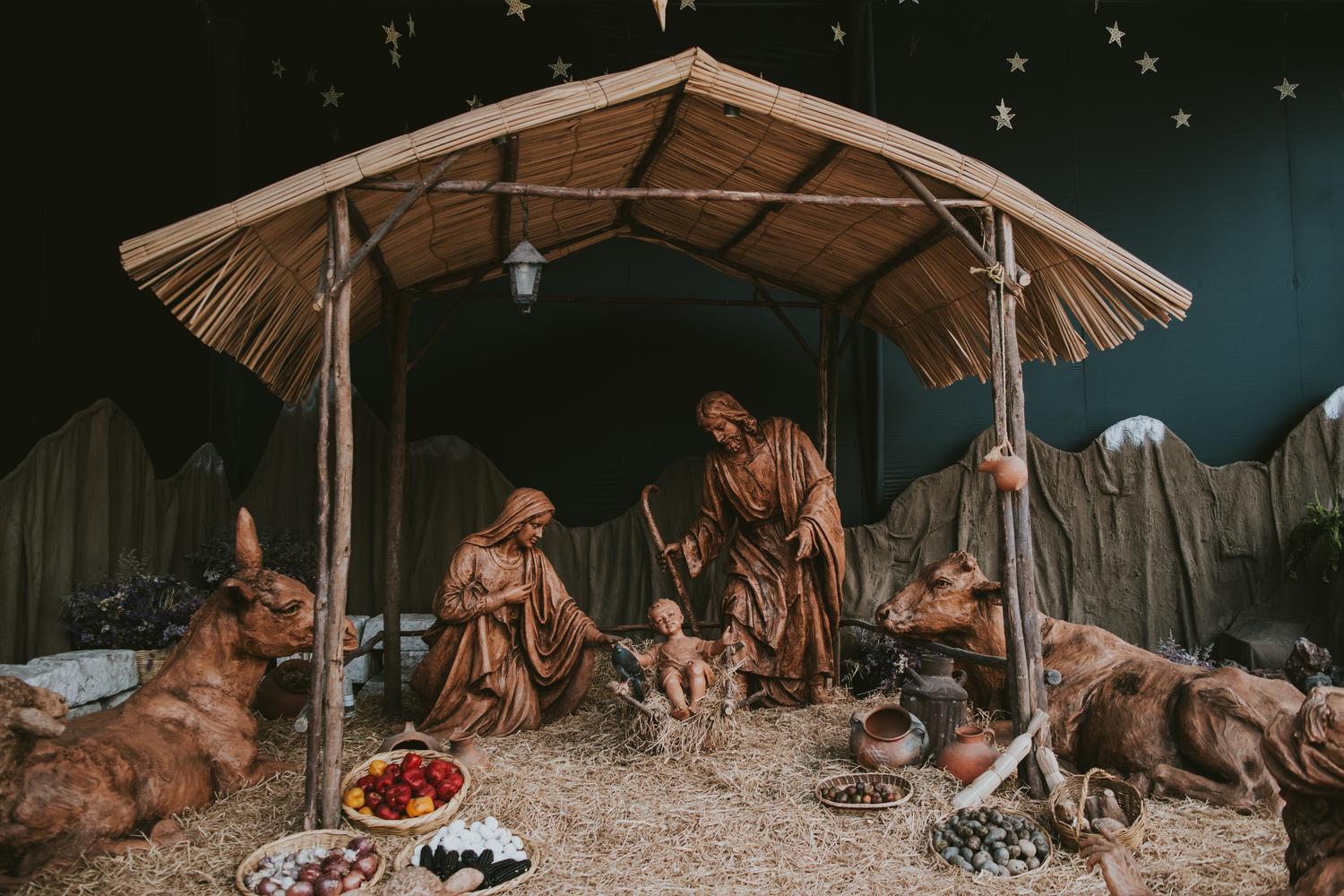 Christmas. Bringing families together when creating the crib, this little piece of clay has a great story.

Today we'll tell you about its history and how it was made. You can also find all the magic of the Provençal end of year celebrations in our article on Christmas markets.

Where do Provencal santons come from? 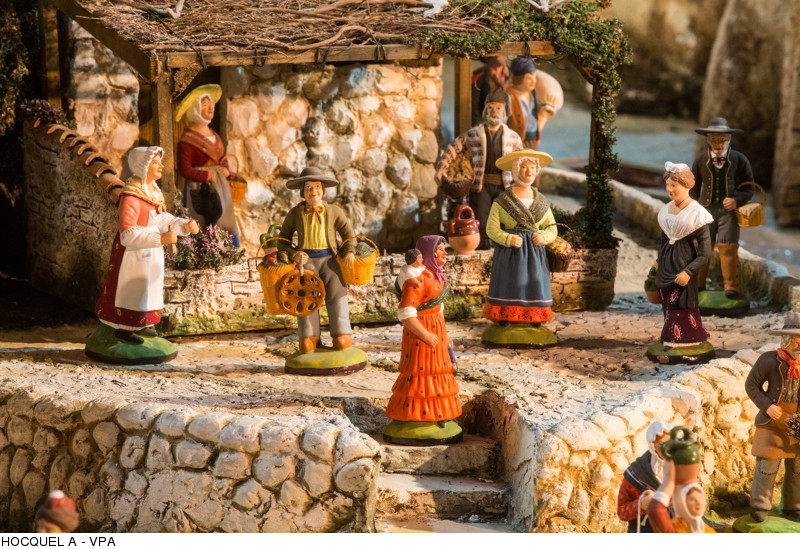 You should know that the santon was born from the French Revolution. In fact in 1793, the state decided to close all churches because they prevented them (the clergy in particular) from implementing the policy it wanted following July 14, 1789.

Or the people who were deeply attached to their religion went to church at Christmas time to admire the Christmas Crib. And as they could no longer go there, while hiding because it was forbidden, they started to make their own crib at home. It was elsewhere in Provence that the first "clandestine" cribs appeared at the risk of getting caught and having their heads cut off.

At the beginning these little saints were made with bread crumbs or papier maché. Then in 1798, Jean Louis Lagnel (Marseille) discovered during a walk, clay and he had the idea, since this land was very malleable, to create a small crib with it. It was quickly bought: and here is the birth of the profession of santonnier.

Then little by little, the crib grew with the representation of old crafts and it became colorful with the clothing or the painting of the little santons.

But the origin of the crib dates back to 1223 with the representation by Saint Francis of Assisi of a living crib in Italy. You should still know that his mother was from Tarascon (Bouches-du-Rhône, France)! Then they appeared in churches in the 16th century.

These little santons have become so important that the first santon fair was created in Marseille in 1803. It begins at the end of November and ends at the beginning of January and has done so every year for 200 years!

Now that we know the history of this little piece of clay, let's talk about how it was made.

How are Provencal santons made? 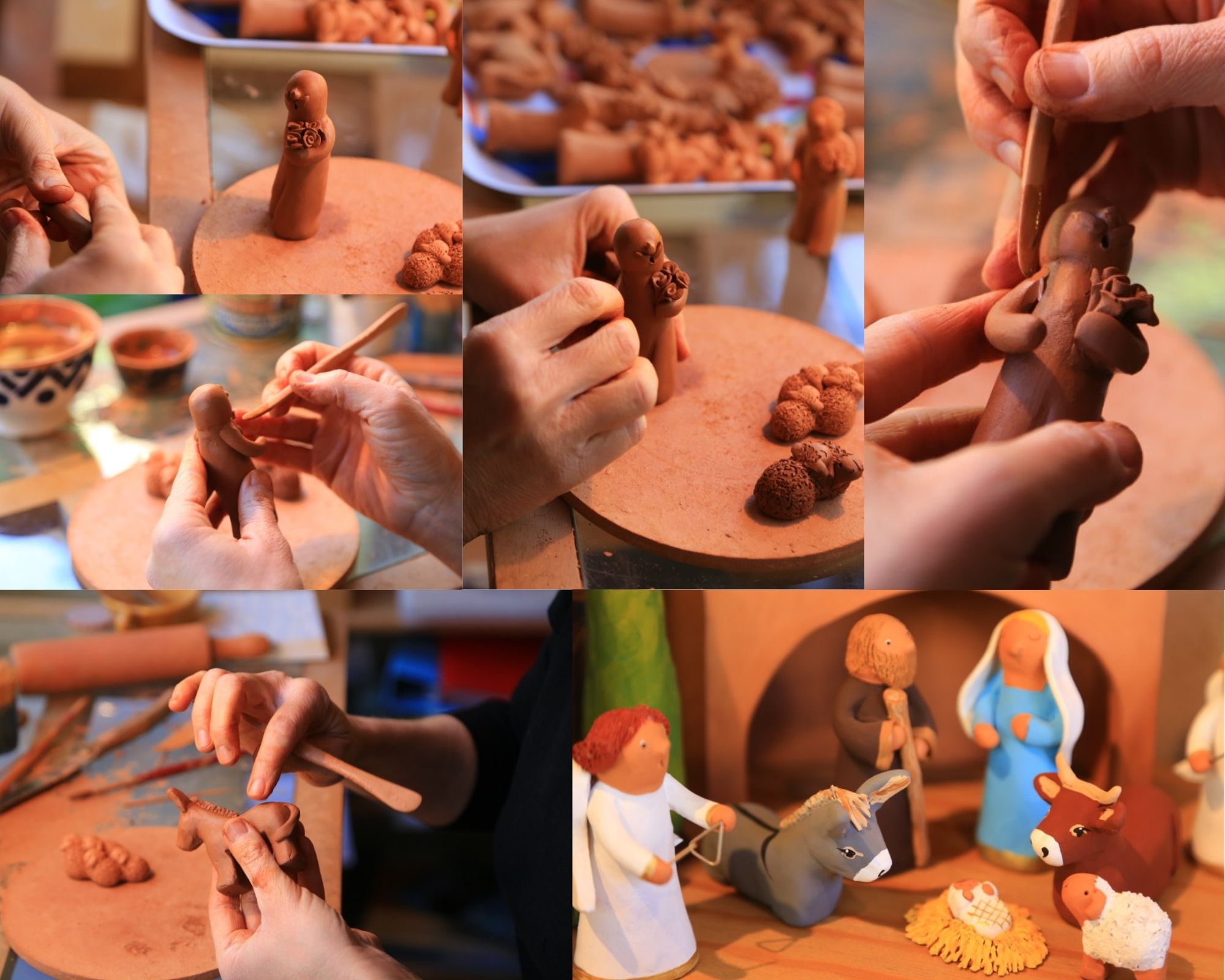 You should know that its manufacture takes place in six stages:
- modeling
- the creation of the mold
- molding
- deburring
- the cooking
- the decoration

So here is a little more explanation:

The santon maker will first imagine the santon he wants to create: size, profession, history ...
Then he will create this little santon with raw red clay using different tools: roughing tool, mirettes ...
Over the days or even weeks, the santon takes shape. Once the santonnier is satisfied with the details such as the expression, he keeps it in a place that will prevent it from drying out in order to move on to the manufacture of the mold.

You should know that thanks to this technique, the Santon de Provence remains unique and produced in small quantities which will ensure a unique manufacturing quality and know-how.

The santon maker will therefore use plaster to wrap his clay santon so as to capture all the details of the face and back. Once dry it will then obtain a mold in two parts.

Plaster is an important value in the creation of the santon de Provence and its recipe often kept secret because it is he who will capture all the details of the santon and bring it to life.

Once created, the santonnier will perform the molding.

Then comes the unmoulding, which is just as essential since you have to be delicate so as not to damage all the small details that will give life to the santon.

Once removed from the mold, depending on the humidity, the santon must be allowed to dry. Only after this step, the santonnier can perform the deburring.

This step is the longest, the most rigorous and the most sensitive because it is necessary to remove all the excess clay that surrounds the santon. You have to be meticulous and patient so as not to damage it and to be able to bring it to life afterwards.

After that, the santonnier will let his santon de Provence air dry for about 72 hours so that it is completely dry. Then he can cook it for about 20 hours.

The santon maker will light his oven and wait for it to reach 500 ° C before being able to put his santon in it (step called the "small fire"). Then depending on the manufacturing methods, the santon will be introduced into it until the oven reaches a certain temperature (for example: 980 ° C).

Then the baking cycle will end with a drop in the natural temperature of the oven so that the santon is very robust and can last for years in your Christmas crib.

At this stage the santon is raw it is time to give it its colors!

There are two ways to decorate it: with paint and / or with fabric.

It is up to the santonnier to choose according to what he imagines during the first stage of manufacture.

If the santonnier paints his santons he will use a high quality brush with very fine bristles, water-based paint and an eraser. It will also need a helping hand for a neat and precise rendering.
You should also know that the santons are not painted one by one, in fact, the santonnier will always paint his santons from top to bottom, starting with all the faces, the hair, then the clothes ...Some take care to give each santon a different emotion.

You now know the secrets of making santon de Provence.

But did you know that there are several sizes?

There are three: the smart santon, the traditional santon and the grand santon.

The smart santon is 1 to 3 cm high, the traditional santon about 10cm and the large santon can reach 20 cm high. These are the ones who are most often dressed because the santonnier can focus on the smallest details such as the woven wicker basket, the felt hats ...

The santonnier will prepare all his santons for a whole year which will tend to invade his whole house to be able to sell them when the time comes at a santon fair or on a Provençal Christmas market.

You can watch a short video on how they were made, or visit the most important and beautiful collection of santon de Provence at Fontaine de Vaucluse at the Musée du Santon et Traditions de Provence.

What are the different santons of Provence? 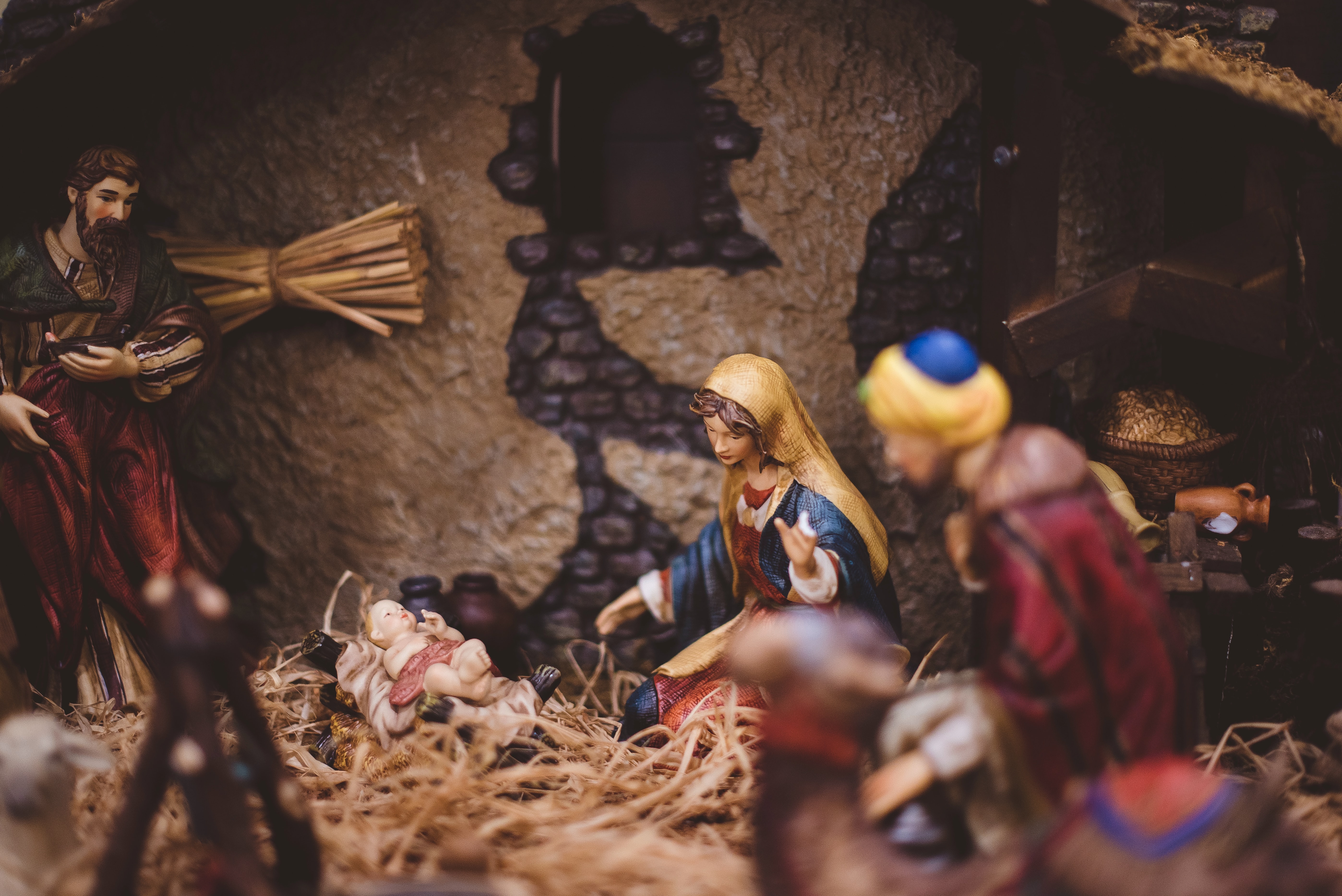 The Provençal crib has many little figurines that everyone knows: the virgin Mary (Santo Vierge), Joseph (Sant Jousè), the donkey (the ase) and the ox (lou biou) then on the evening of the 24th. infant Jesus (the Infant Jesus) in his cradle. But others are just as essential:

Who is the messenger of Jesus' birth and who will guide the villagers to the stable.

The blind man leaning on his son's shoulder

He's a middle-aged man with his beard and gray hair and his cane. His son still holds his hat in his hand as a sign of respect for his father who had become blind because of mourning for his first missing son, and he hopes the baby Jesus will restore his sight.

They are the only villains in the crib, accused of stealing sheets and hens or kidnapping the children. When they come to the crib, the couple blindly returns their son, Chicoulet, whom he had stolen from him.
The gypsy man with his black hair and beard is dressed in garish colors, a black cloak, and a knife.
The gypsy woman has a kerchief tied on her head, a long skirt and a bodice. She will have a tambourine in her hand and her child on her hip.

Unmissable petticoat at the Provençal crib. Most of the time he is represented with a sloppy outfit: pants held by a single strap. He carries a lantern and a bucket.

It's the village idiot who brings good luck. He has nothing to give for the birth but is happy about it. He can be recognized by his arms raised in the sky when he learns of the birth of Jesus.

Represented in different ways young, on their knees, old with wise eyes, lying and waiting or accompanied by one or more sheep, they are responsible for spreading the news.

Very often present with his Gardian represented with his white horse.
The Arlesienne is always dressed in the most beautiful assets of the Arles costume and her headdress in terms of her age, it is up to the santonnier to decide.

Represented with his tambourine and his galoubet, it is he who leads the dancers (the farandole). 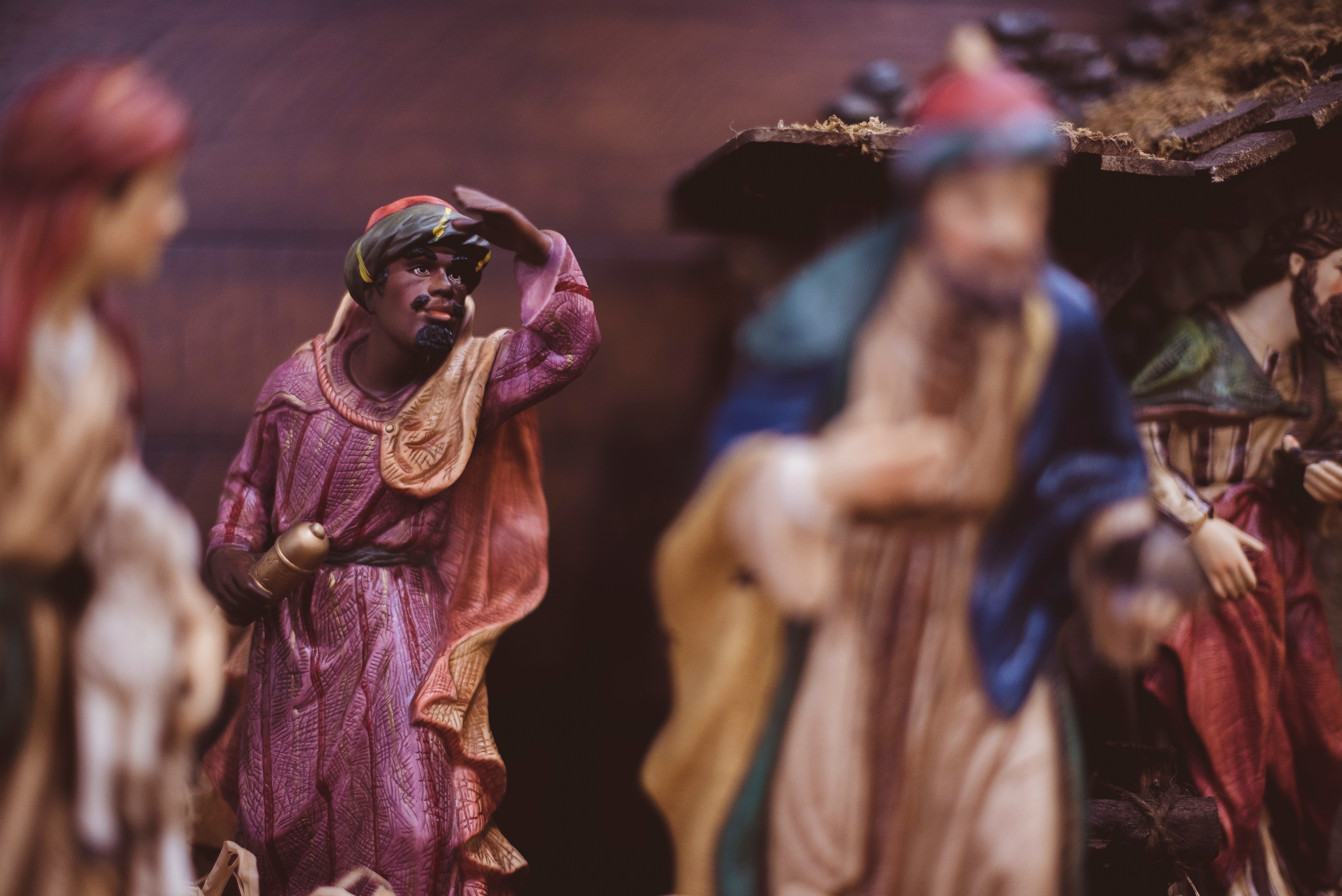 Dressed in an elegant suit, a felt hat, a white shirt, a waistcoat, a black velvet jacket, and his pants tightened by a taiole (typical belt from Provence).

The farandoleurs form a line which winds its way. The men are dressed like the drummer and the women like the Arlésiennes.

Added at the time of the epiphany (January 6), they are 3 in number:

- Melchior, with white hair and long beard brings gold as an offering.
- Gaspard, originally from India, brings incense.
- Balthazar, the one with the black skin brings the myrrh.
They are dressed in very beautiful clothes. They are usually accompanied by dromedaries and a camel driver. 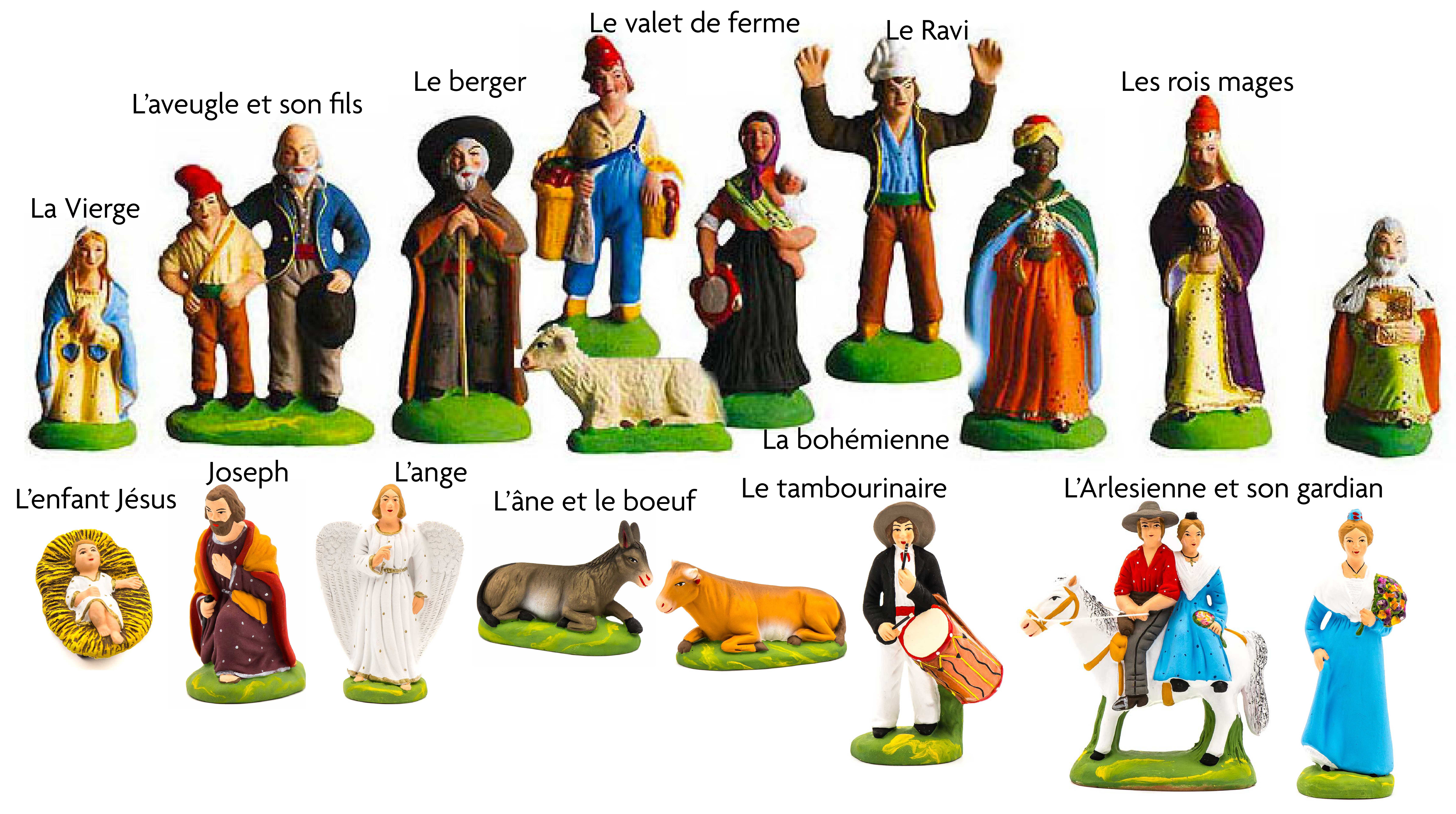 What are the Santon museums?

Now that you know more about the Santon de Provence, we can tell you about our good addresses to be able to admire them:

Museum of the Provençal Nativity Scene in Cavaillon

The Grignan crib is one of the largest in the world, in fact it covers 400m² with 70 houses and 1000 figurines! It will take you on average 45 minutes to appreciate this Provençal spectacle.

The Provençal crèche in Avignon, which occupies 54m² in the Church of Celestines, represents pure Provence with rocky massifs, scrubland, vines, fields of lavender and olive trees ... more than 600 santons, including some by Marcel Carbonel mentioned above, animate this crib.

Now you know our santon de Provence a little better! And if you wish, we invite you to read our article on Christmas markets in Provence.

Want to discover Provence and its santons? All our holiday villa rentals with swimming pool will allow you to spend pleasant moments with family or friends in the heart of Provence. 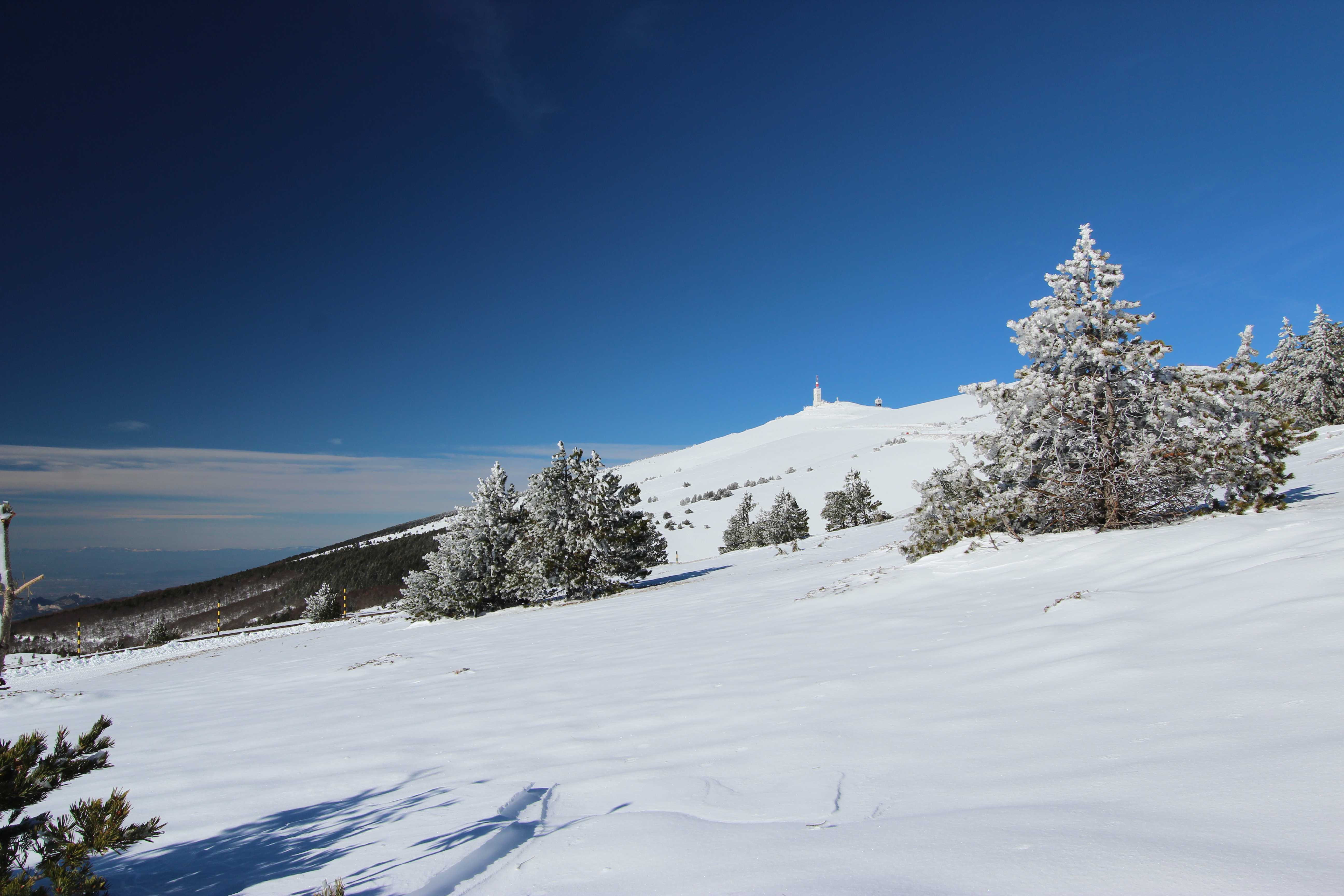